I was recently asked to write a meditation based on the story of Ezra’s rebuilding of the temple. The Jews had been living in exile for seventy years, as had been prophesied, and then miraculously King Cyrus, had been used by God to help them to return to their own land.

But returning was not easy. It took yet other prophets to inspire them to build up the walls of Jerusalem, and eventually to begin to rebuild their temple, God’s home. The verses I was asked to write about were Ezra 3:10-13

The foundations at last had been laid. It should have been such a joyful occasion, and yet - .Yes, there
was a joyful outpouring of praise, yet, with the shouting and singing there was also weeping. 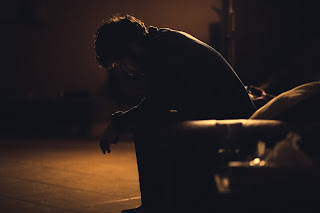 I felt the Holy Spirit was searching my heart. Where would I have stood in that great company? When you are old it is easy to look back to the good old days.

As a young Christian I was privileged to go to ‘The Mount’ as we used to call Penygroes, - a little Welsh mining village where each year the nations gathered to worship God and receive his ministry to us. It had started out of the Welsh revival, and God was still doing wonderful things.

But even then, there were those who would tell us that things were not as  good as they used to be, but for us they were days of heaven on earth. When working abroad as a missionary, the ‘Penygroes week’ was the time I felt home-sick, longing to be there.

But years later, now as a Pastor’s wife, I found that I was giving assent to the critics who looked back to the ‘good old days’. That was, until I met this couple who had come for the first time. For them it was days of heaven on earth, just as it had been for us. I was convicted. I realised it was I who had changed, not God. I realised too that if I would come, seeking him, that he would always be found by me. Faithful God, so unchanging!

On a lonely mission station in the Highlands of New Guinea, a colleague  had pinned a banner to the woven grass walls of his office.

It had been a struggle for me to accept the teaching that we should praise God for everything, or at least in everything, because we can trust him to make all things work together for good. Having eventually accepted it I find I cannot get away from it. 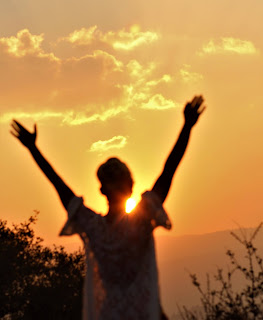 Someone said that we have three choices when something seemingly bad happens.

1) We can refuse to accept this circumstance and fight against it.

2) We can grit our teeth as something bad that we have to endure, or

3)We can open our hearts and embrace it as something God has allowed and  trust him to work out his good purpose in our lives.

With David we can say, ‘I will bless the Lord at all times,’ and join with the praisers, not the weepers,
as foundations are still being laid for God’s temple.

Have we courage too, to raise a banner and say